These career coaching case studies from my client files* demonstrate how life coaching helped these clients move from where they were to where they wanted to be in their jobs  and careers.
*And, of course, names have been changed to protect confidentiality and privacy.

1. How Leah recovered from firing

Leah had long had a goal to take the career leap from being a teacher to a trainer. She was over the moon with delight when she got a job with an organisation specialising in change management and team building.

Leah set herself a specific goal to become a leading facilitator within the organisation. So far, so good.

Then disaster struck. In the first workshop that she was allowed to lead on her own, Leah came up against a difficult and disruptive participant. Because of her lack of experience, she did not handle the situation well and nn the feedback forms that participants filled out at the end of the workshop, some of the comments very negative.

The training organisation, in a fit of over zealous damage control, fired her!

Leah was devastated. She felt she had no option but to throw in the towel and go back to teaching. Her confidence was shattered. She decided she did not have what it would take to achieve her goal.

She came to me for coaching to restore her confidence and find a new direction.

Coaching Breakthrough: Leah realised this was not the end, just a setback to learn from

As I took her through my process of turning around failed goals into stepping stones forward, we reviewed that dreadful day in all its horror and how the drama had unfolded.

Leah came to realise that she was not going to get everything right first time and there were going to be lots of learning experiences to benefit from (maybe not as severe as the first one) .

I then helped her work our some strategies she could have used to better handle the difficult participant and keep the rest of the people in the workshop with her.

When Leah came to a frame of mind where she could look back on the reason for her failed goal and view it as "a mistake I learned from and don't have to make again", her energy and motivation for her training career returned.

This career coaching example demonstrates how a bad experience in a previous job can keep a client from moving forward confidently.  As a coach, look at what happened and what needs to happen to turn that experience around to a stepping stone rather than a failure that is holding the client back.

You'll find a whole chapter on helping your clients turning around failed goals in my new book Mastering the Art of Goals Coaching.

Why Did Jack's Dream Job Turn Into a Nightmare? 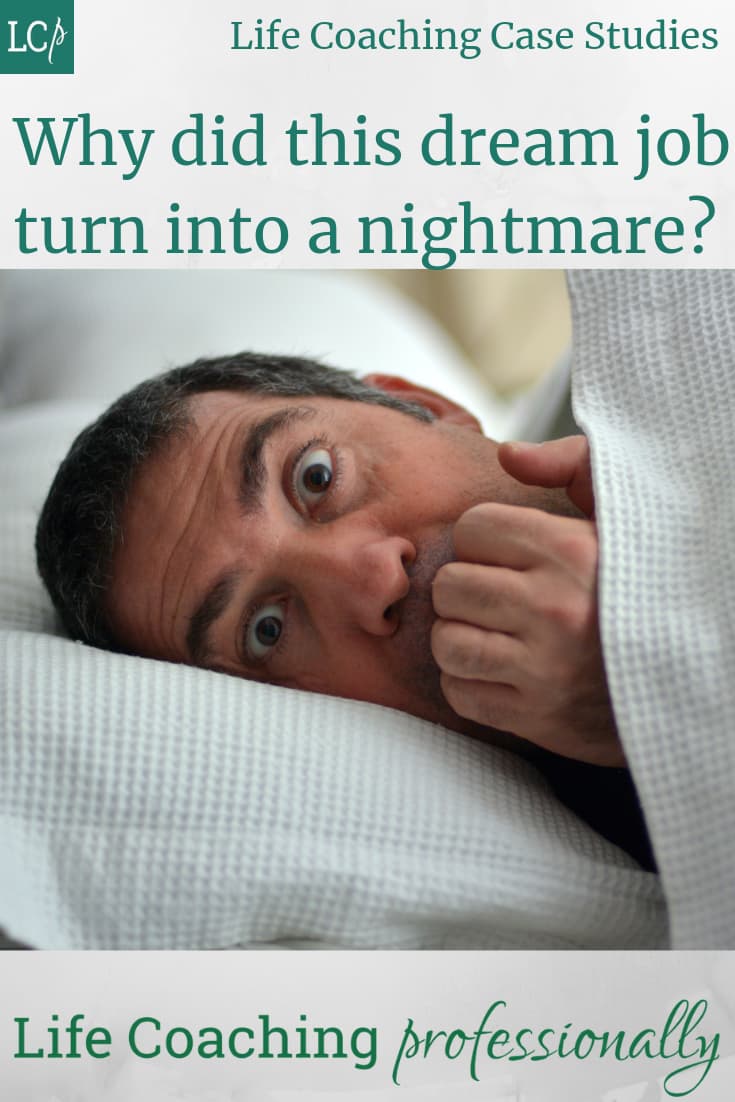 For a long time Jack had a goal to move interstate and work for a company that organised motivational seminars.

When he got the job as operations manager for the promoters of a well known personal growth seminar, he was over the moon. He loved the self-discovery and growth principles of the organisation.

His joy didn't last long though. Although well qualified for the job, Jack became totally stressed out with the frantic pace and dealing with his team. He was coming home anxious and despondent and it was starting to affecting his family life.

Jack was very confused. What had gone wrong with his dream job? It had become more of a nightmare.He was questioning what was wrong with HIM?

Coaching Breakthrough: Jack got in touch with his core needs and values

With coaching, I helped Jack get in touch with his core needs and values around health, harmony and peace that needed to be place for him to be happy in his work.

He discovered that, while he valued and needed personal growth highly, he also had a needed an environment that was healthy, harmonious and peaceful to be happy. These were not exactly features of the long, pressure-filled, team leading days of his new job.

He decided to quit and get a less pressured job and study to be a naturopath. His new goal not only reflected his values of personal growth and health but honoured his other values and needs of harmony and peace .

A valuable career coaching lesson is to spend time with your clients get in touch with their core needs (what drives their behaviour) as well as their values.  It's a vital step in identifying the whole picture of the client and any career issues and what will bring them job and personal satisfaction.

recommended  Tools For To Hlep you become A Career Coaching

This really useful Career Coaching Toolkit was created by my colleague Emma Louise of The Coaching Tools Company to use with clients who want to work on their careers. 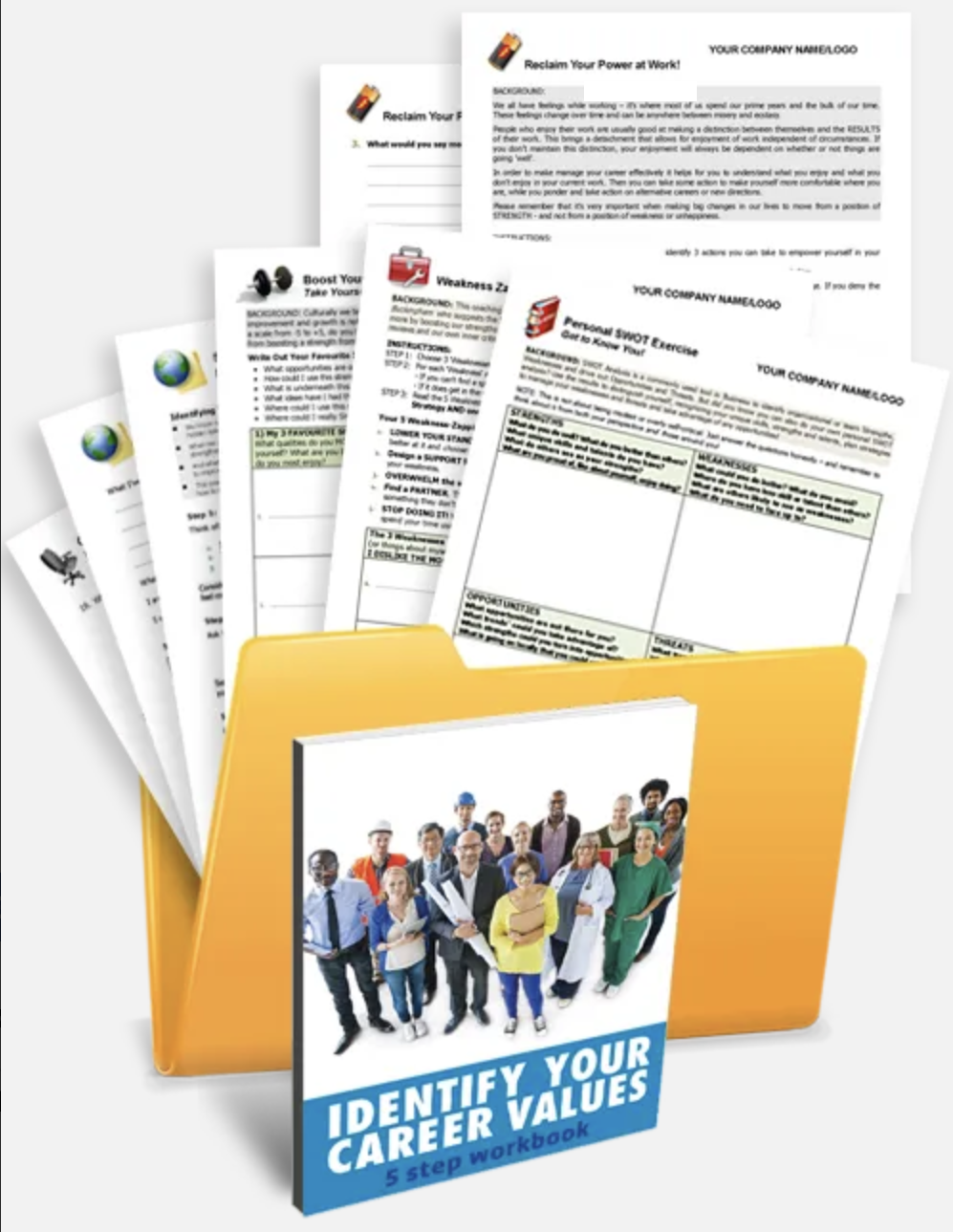 All the tools are brand able to your own own coaching business.
This fabulous kit includes:

Sally Was In Overwhelm About Her Trucking Career Goal 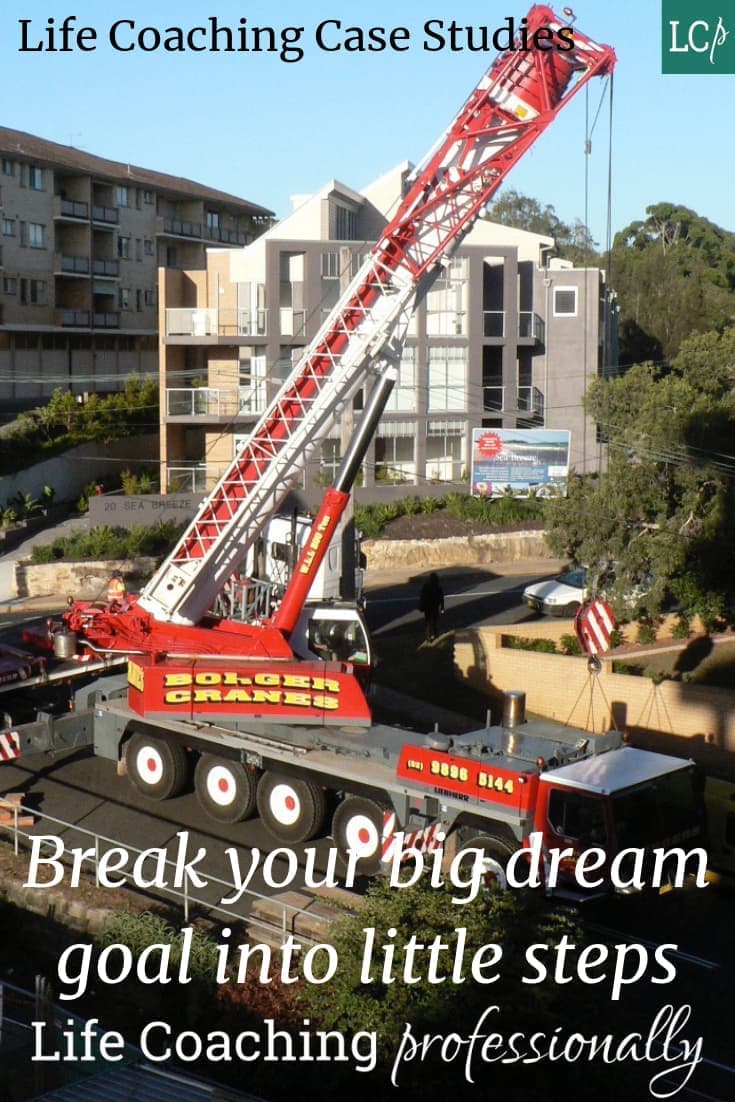 Sally's ultimate dream job as a truck driver was to drive one of those huge vehicles used in mines and be employed on a fly-in, fly-out  basis. She had set herself a six month time frame to achieve this.

She knew what she needed to do to achieve the goal but was having trouble deciding what to do first. She was very confused! The main big step was to obtain a special dump truck licence but this was expensive. She also found the process of getting this license a bit overwhelming.

On the plus side, Sally was delighted with the fact that being a woman in the male dominated trucking industry was turning out to be no barrier to success.

However, in the mate-ship atmosphere, she found controlling her junk eating and beer drinking habit with the boys hard to break. This was affecting her health and weight not to mention the budgeting she needed to do to pay for that expensive dump truck licence.

So learning to survive and flourish in this male dominated environment was another goal.

I worked with Sally to realise she needed to break down the goal to achieve her dream job and get that important licence into smaller manageable steps. This involved getting other relevant licenses before she went for the big one and to start setting up contacts and relationships that would get her the job she was after.

We also made the deadline of her goal more realistic.

I also helped Sally develop some strategies to help her have more confidence so didn't have to go with the blokes culture.

The last I heard from Sally was that she had achieved two more important, but easier to get licenses on the way to the big final one, which gave her confidence and would put her in good stead for her dream job.  She had also made contact and established relationships  with people that would know about any job vacancies that came up and get in touch with her.

Sally also now had the confidence not to feel the need to be "one of the blokes" and was eating better, drinking a lot less and managing her budget.

The career coaching case study here is shows the importance of working with the client to help them to set a realistic time frame for their goal and break down what needs to happen into small manageable steps.  Also to help them realise that just because they are working in a particular environment they don't have to adopt other peoples behaviours.

All the clients I have featured here wanted help moving forward - handling any obstacles, even disasters, that they felt  stood in the way of their career success.