These goal achievement case studies show some of the more subtle and creative strategies I have used to guide guide clients and overcome the things that got in the way of their successful goal planning.

*Of course names have been changed to protect the client's confidentiality and privacy.

Amelia's Goals Were Doing A Tug-O-War 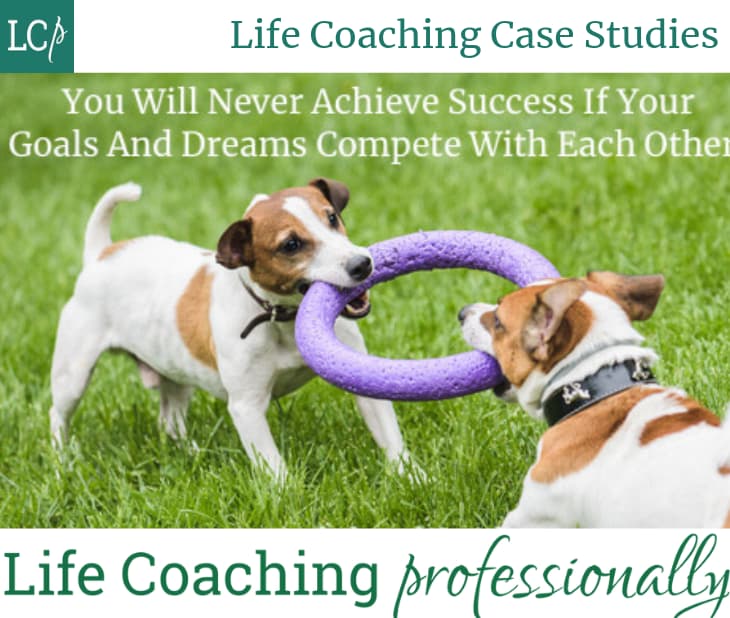 Amelia was 34 when she came to me for coaching around her goals.

She loved to travel and her career goal was to be National Sales Manager for her company that it would involve a lot of interstate and overseas travel and being away from home for days, even weeks, at a time.

The other big goal she shared with me was that she and her partner intended to have started a family by the time she was 35.

You guessed it! The goals were not compatible but each going in a different direction.

The result was that Amelia never seemed to have the real motivation and drive she needed to achieve her career goal and it was never quite the right time to start a family.

Coaching Breakthrough: Amelia realised what was causing the stalemate in her life.

Amelia came to realise that if she kept going this way - being pulled in two directions by conflicting goals - her career goal would stall and having a family could become one of those "some-day" goals that might never happen.

I asked her: "What in your heart of hearts, do you really want the most? Your career/travel goal or starting a family? If you had to let one of these goals go, which would it be." Starting a family easily won out as the priority.

She chose to reorganise her career goal to something just as stimulating and rewarding but without the travel component and more flexible to her as a parent. Her love of overseas travel could now be satisfied by family vacations.

When you are coaching a client on goal achievement make make sure their goals align and do not conflict with each other. 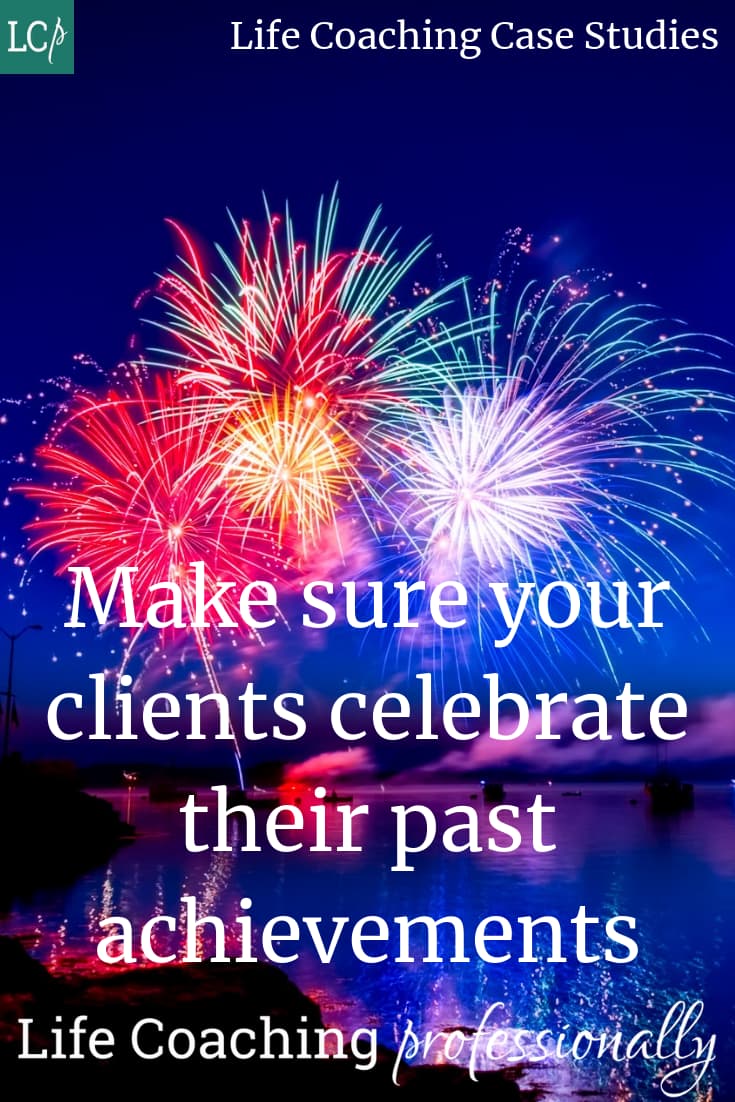 Jack, a successful lawyer, came to a Goals Clinic I was facilitating.

When I asked the participants to share their achieved goals, Jack gloomily said he couldn’t think of any goals he had achieved to share with the group.

I knew he must have a law degree, so in the break I asked him if he had every really acknowledged achieving this degree and all the hard work it took.

Jack told me that he had studied long and hard at university with the goal to get his law degree first time around.

The he revealed that when he passed with honours, he did not really acknowledge himself or celebrate his success. After all, it was only what was expected of him by his high achieving family.

Rather, Jack immediately put all his energy into finding a position within a law firm and being a success at it. He did well but never felt particularly successful.

Coaching Breakthrough: Jack realised it was time to celebrate

The lights went on for Jack when he saw that he had glossed over this major achievement (as well as several sporting wins we unearthed).

His energy changed and everyone in the workshop could see and feel it. He realised he had had sailed past several other goals without acknowledgement or celebration.

Jack committed to celebrating those lost and forgotten achieved goals by buying a new sound system for his car and a special dinner with his wife.

He was then back in achiever mode in the workshop and ready to set a new goal.

Through coaching, the client may come to recognise goals that have been achieved but just glossed over as they rushed forward to the next expected thing. Getting the client to acknowledge and celebrate those overlooked achievements, invariably results in renewed confidence and motivation.

Coach your clients to achieve their goals and learn new life skills with a fresh new approach? In my book Mastering the Art of Goals Coaching you'll learn how to help your clients .... 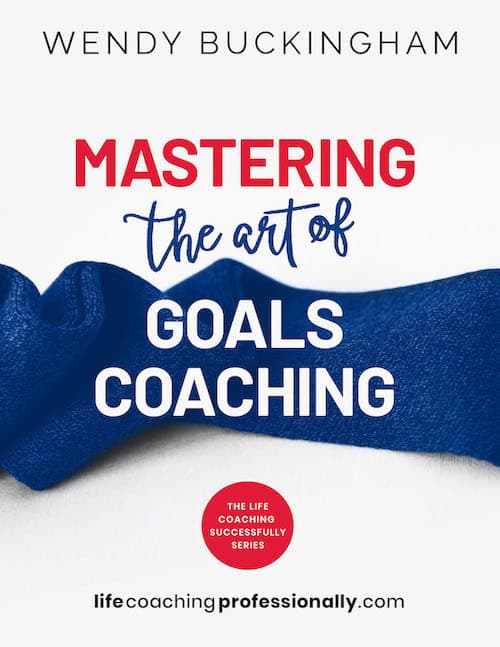 Phillipa Goal To Write A book Was Stuck 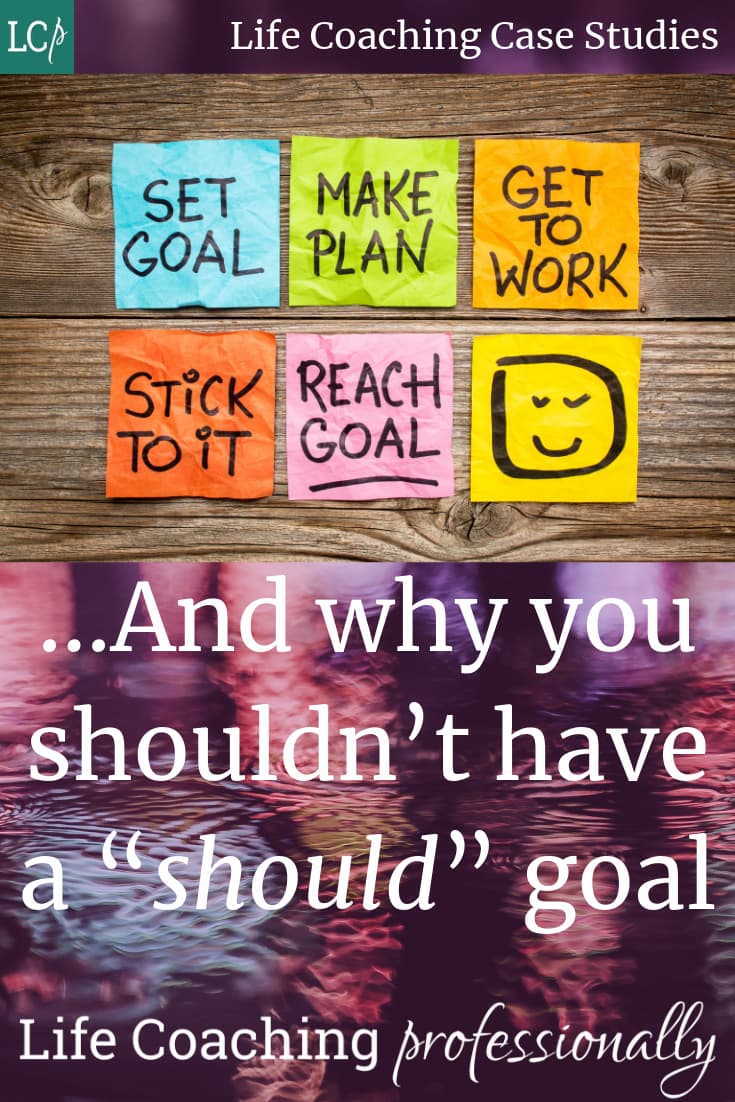 Phillipa came to me for coaching because her goal to write about her amazing life had stalled and she was finding it a chore. She was quite enthusiastic in the beginning but it never really flowed and her efforts soon diminished to a trickle of words.

Everybody in her circle said she should write a book because she had so much information and wisdom to share. They convinced her that with such a fascinating story to tell, it was what she felt she should do at her time of life.

She felt terrible about it all. People kept asking her "How’s the book coming on?" So she forced herself to keep going, convinced it was something she had to finish.

Coaching Breakthrough: A "Should" is not an authentic goal

The truth that came out with my coaching was that Phillipa had never really wanted to write a book! She felt no burning need to put it all out there. Her goal was based on other people’s opinions and expectations.

When she came to see this, she made the choice not to continue writing, let the goal go and not try live up to other people's expectations. She was proud of, and comfortable with that decision .

Make sure your goals are authentic and not "shoulds"

The thing to be learned from Phillipa's experience is to make sure your client's goals are what they really want and not something you or other people think they should do.  They need to "own" the goal completely.

I hope you have found these client case studies useful. As you can see there is far more to goal success that simply setting and planning.